Tori Wu is a Dauntless member transfer from Erudite, who later became a vital and good friend to Tris Prior.

She is portrayed by actress Maggie Q in the Divergent movie.

Tori Wu was the one who oversaw and administered Tris ' aptitude test, discovering and telling her that she was a Divergent and the dangers and complications that came with being one. She has a tattoo of a red-eyed black and white hawk on the back of her neck, symbolizing the sun, reminding her of her fear of the dark that she had overcome. 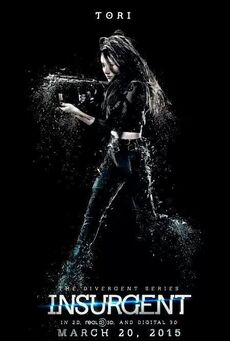 She is later revealed to be one of the tattoo artists in the Dauntless compound, and was said to have transferred from Erudite with her brother, Georgie, who was eventually killed, presumably for being Divergent. Tori says she wants revenge, but that she's waiting for the right moment. She is one of the Dauntless under the simulation at the end of the book and is seen killing a man.

Tori isn't mentioned for a while in the beginning of Insurgent, and at that point it is unknown whether she survived. Later on she appears injured in the leg alongside Zeke, who was believed to be a Dauntless traitor, siding with Erudite, but it transforms that both Zeke and Tori were informants. After the traitors shot Tori, she and Zeke fled to join the loyal Dauntless who were living in the Candor faction.

While at Candor, Tori, with Harrison, Tris and Tobias Eaton, is elected by the remaining loyal Dauntless to be one of the three new leaders. Tris declines her election, so Tori, Harrison and Four (Tobias) automatically become the new leaders. They, after hearing that Candor will agree with Erudite's demands that include handing over Eric, run to the cell where Eric is being held and sentence him to death according to Dauntless rules. Straight after that, the Dauntless return to the Dauntless HQ, Tori among them.

During a meeting with the Factionless, Four tells the Factionless that Tori would probably request the right to execute Jeanine Matthews. Tris (and readers) are unsure whether Tori's hatred for Jeanine is common knowledge or whether Four and Tori, both being leaders, have shared information. Despite this, it is unclear as to whether Four knows the reason behind Tori's hatred.

It is assumed that Tori, along with the other Dauntless leaders, arranges the attack on Erudite. She is part of the group that are trying to infiltrate Jeanine Matthews' laboratory that Tori discovered whilst she was an informer. Tris bursts into the laboratory to find Tori already there, pointing a gun at Jeanine. Tori, and Tris go into an all out battle for her gun, Tris shoves Tori down and attempts to grab the gun while Tori bites Tris' hand until it bleeds. despite Tris' attempts to intervene as she needed Jeanine to access documents on her computer, stabs Jeanine with a hidden knife in revenge for her brother, Jonathan/George Wu, who (Tori believes) was killed when Dauntless and Erudite found out that he was Divergent. Jeanine whispers Tori's brother's name as she dies in request to Tori's demand that she speak Jonathan/George's name.

Tori calls Tris a traitor, seemingly not bothered as to why Tris tried to stop the attack on Erudite. Tori is seemingly agile during her attack on Jeanine, yet she is seen limping afterwards due to her wound. Tori finds herself, alongside the rest of the Dauntless who chose to attack Erudite, being threatened by the Factionless who disagreed with Dauntless' attack on Erudite.

It is noted in Divergent that Tori is being controlled by the simulation during the attack against Abnegation, yet in Insurgent, Tris notes that to get through the trap leading into Jeanine Matthews' laboratory, the person would have to be Divergent, and Tori had to get through the trap to reach the laboratory. Therefore it is unclear whether Tori is Divergent or not, as it is highly possible that, like Four, she managed to hide her Divergence from the Dauntless and Erudite leaders, and continued to hide it throughout the novels, particularly as her brother was killed by Jeanine Matthews for being Divergent.

Tori is first seen while Evelyn Johnson is giving a speech about their new schedule. From Tris's perspective, Tori is folding her arms, and gives a sneer.

She is seen again in Candor headquarters with Johanna Reyes, Cara, Robert Black, and many Dauntless. She is one of the people assigned to go outside of the fence, from Cara's own decision.

When they're on the way to exit Chicago and find out what is beyond the fence, Tris is walking, staring ahead at Tori's tattoo, remembering that is resembles the fear of darkness she has overcome. The characters next hear gunshots, and she can't see Tori anymore, because her flashlight fell out of her hand. Tris runs to Tori, but it's too late. Tori died in a few seconds.

Tori gives the travelers ( inside the fence) tattoos of their original fear numbers.

Tori has small, dark, angular eyes and straight black hair streaked with gray. She has a tattoo of a white hawk with red-eyes on the back of her neck and a tattoo of a river on her arm. When she smiles, the corner of her eyes usually crinkle.
Cbd 02693r.jpg
BYPuEWWCYAAjEt51.jpg-large1.jpg
Add a photo to this gallery
Retrieved from "https://divergente-br.fandom.com/wiki/Tori_Wu?oldid=4371"
Community content is available under CC-BY-SA unless otherwise noted.